In early 1925, James C. Chadwick came to Seminole to work for the Clark-Darland Furniture, Hardware and Undertaking Co. Later, on September 15, 1926, Chadwick and Henry C. Born bought the undertaking part of the company from Clark-Darland and established the Born-Chadwick Funeral Home.

Later Chadwick bought out Born and the name was changed to Chadwick Funeral Home and operated under that name until 1953. The name was then changed to Somerville-Swearingen Funeral Home, after a buy-out agreement between Chadwick, Rex Sommerville and Gene Swearingen.

A competitor, the Gibson Funeral Home, was opened in Seminole in 1937 by C.W. Gibson, Bart Greer and Grant Hitchcock.

It was originally known as the Hitchcock Funeral Home, but in 1940 changed its name to Gibson-Greer Funeral Home. Then in 1946 it became the Gibson Funeral Home.

The firm operated in two locations until 1960, when they sold the old Chadwick Funeral Home property to the Humpty-Dumpty grocery store and moved its complete operations to its present location at Milt Phillips and Strothers Ave.

The current funeral home is located on the old homestead of the late O.D. Strothers, who was one of Seminole's more prominent citizens during the Oil Boom Days.

In 1973, Rex Sommerville retired from active practice and in 1983, Harry R. Arnhart retired from the funeral part of the business.

In 1952, he returned home to Seminole to go to work for the Chadwick Funeral Home in which he purchased half interest two years later. 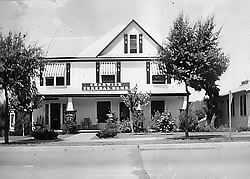 This is the Old Chadwick Funeral Home. It was located at the corner of Milt Phillips and Evans. Currently IGA occupies this corner. 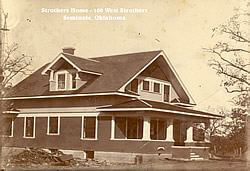 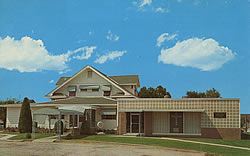 This is the Strother's Home that the current Funeral Home is built around. If you look at the roof line you can still see the second story.

We stand ready to assist you. If a death has occurred, please call us on the number below: